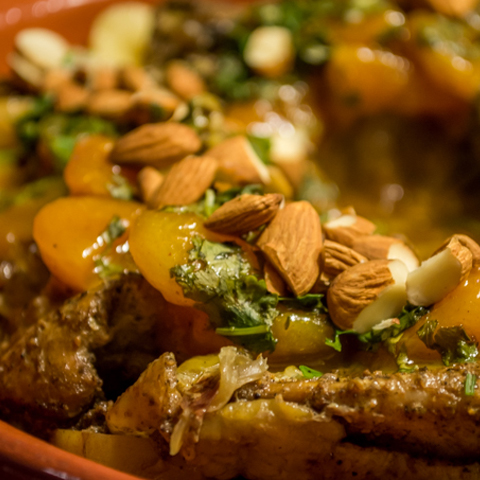 A “tagine” is a earthen-ware cooking pot used in Northern African cuisine.  We use a more contemporary version of this cooking method – a cast iron skillet – to create this slightly-sweet, Moroccan-spiced chicken dish that pairs beautifully with our Viognier.

Stir together gorund cinnamon, ginger, turmeric, pepper, 1 teaspoon salt, and 2 tablespoons of olive oil in a large bowl.  Add the chicken and turn to coat well.

Heat the butter and 1 tablespoon of olive oil in the base of an uncovered tagine (or a skillet) over moderate heat until hot, but not smoking.  Then brown half of the chicken, skin side down, turning over once (about 8 to 12 minutes).  Transfer to a plate and brown the remainder of the chicken in the same manner making sure to add any remaining spice mixture from the bowl.

Add the onion and remaining 1/4 teaspoon of salt to the tagine and cook uncovered, stirring frequently, until soft (about 8 minutes).  Add the garlic and cook, stirring occasionally, for about 3 minutes.  Tie the cilantro and parsley into a bundle with kitchen string and add to the tagine along with the water, chicken, and any juices accumulated on the plate.  Reduce heat and simmer, covered, for 30 minutes.

While the apricots cook, heat the remaining 1/4 cup of oil in a small skillet over moderate heat and cook the almonds, stirring occasionally until just golden (about 1 to 2 minutes).  Use a slotted spoon to transfer the almonds to a paper towel to drain.

Ten minutes before the chicken is done add the apricot mixture to the tagine.  Discard the herbs and cinnamon stick.

Serve the chicken sprinkled with almonds on top.

This recipe was adapted from chef Lafidi’s menu at Jnane Tamsna in Marrakech via Epicurious.com