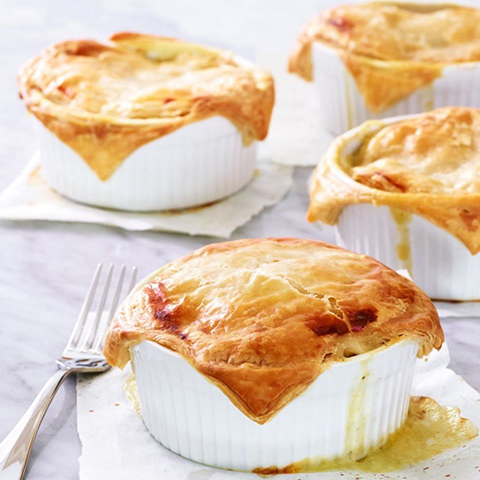 I have fond memories of ordering Lobster Pot Pie at “The Baltic”, a small hotel and restaurant in downtown Point Richmond. After a long, cold day sailing the waters of San Francisco Bay there is nothing better than the creamy goodness of a Lobster Pot Pie and a glass of our white blend.

– TO COOK THE LOBSTER
Bring a large pot of water to boil over high heat.  Add the lobsters head first, cover the pot and cook for ten minutes.  Using tongs transfer the lobster to a large bowl of ice water to stop the cooking and keep the meat tender.  Once the lobsters have cooled, crack the tails, claws, and knuckles to retrieve the meat and cut it into 1/2″ chunks.

– TO CREATE THE POT PIE
Heat the oil in a medium saucepan over medium heat.  Once the oil begins to shimmer add the carrot, celery, onion, fennel, and garlic.  Stir to coat and cook for about 8 minutes or until the mixture begins to brown.  Clear a small space in the center of the pan and add the tomato paste.  Cook for a minute or two then add the wine and stir to incorporate the ingredients, scraping up an brown bits from the bottom of the pan.

Stir in the cream and simmer for 15 minutes or until the liquid is again reduced by half, then stir in the lobster meat.  Remove from the heat.

Preheat the oven to 400 degrees.  Using cooking spray, lightly grease the rims of four 6″ ramekins or similar sized soup bowls and place on a rimmed baking sheet.  Cut the puff pastry to fit the ramekins or bowls, overlapping the edges slightly.

This recipe was adapted from “A Century of Restaurants: Stories and Recipes from America’s Most Historic and Successful Restaurants”

.PDF of this recipe